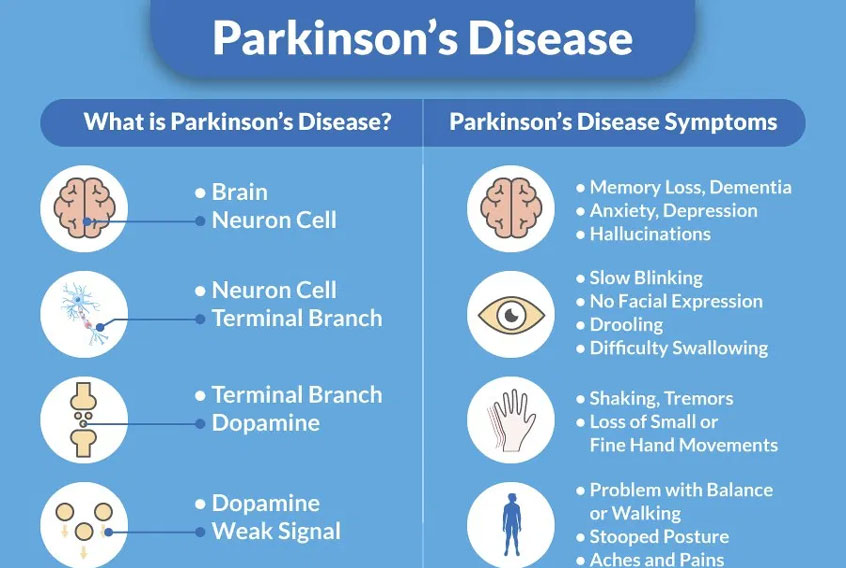 Parkinson’s dementia is a condition that some people can experience as their Parkinson’s progresses. It a ects thinking and memory and can have a big impact on di erent aspects of life.

This information sheet looks at the symptoms and causes of Parkinson’s dementia and provides some practical advice on how life can be made easier for the person a ected and their family, friends and carers.

Dementia symptoms are caused by a significant loss of brain function. There are diffierent forms of the condition and each person will experience dementia in their own way.

Some people will develop dementia after living with Parkinson’s for some time. When someone has Parkinson’s motor symptoms for at least a year before experiencing dementia, this is known as Parkinson’s dementia.

There is a similar condition called dementia with Lewy bodies. This is diagnosed when someone has the symptoms of dementia either before or at the same time as developing Parkinson’s-like problems with movement (called motor symptoms). In some cases, no motor symptoms may develop at all.

What are the symptoms of Parkinson’s dementia?

Symptoms can include forgetfulness, slow thought processes and difficulty concentrating. This can make communication hard and finding words and names or following conversations can be a problem.

Some people find it increasingly difficult to make decisions, plan activities and solve problems. This can make everyday activities such as dressing, cooking or cleaning increasingly hard.

People can also experience changes in their appetite, energy levels and sleeping patterns, so they may find themselves sleeping more during the day, or becoming less engaged with what’s going on around them. A lack of motivation or interest in things they previously enjoyed can also be a symptom.

Problems such as anxiety, depression or irritability can become an issue because of dementia. Some people may also find it difficult to control their emotions and experience sudden outbursts of anger or distress, although these problems are not common.

Some people with Parkinson’s dementia might also develop visual hallucinations and delusions.

Some of the symptoms of Parkinson’s dementia are similar to those caused by other health issues. For example, mental health issues such as depression can mimic dementia. Side effects from medication, or medical problems such as an infection may be the cause of symptoms similar to dementia, such as memory problems. Symptoms caused by medication or infections can be treated effectively.

It’s important to speak to your GP, specialist or Parkinson’s nurse (if you have one) if you think you have these symptoms. They will be able to give you advice on what to do next.

“Emotionally it is hard. Sometimes we have to repeat things and remind dad where he is, but reassurance helps him.” Jennifer, whose father has
Parkinson’s dementia

We still don’t fully understand why some people with Parkinson’s get dementia and it isn’t entirely possible to predict who it will affect. But there are factors that put someone more at risk. Age, for example. It is rare that someone with Parkinson’s under the age of 65 will develop dementia.

If someone with Parkinson’s is experiencing hallucinations or delusions early on in their condition, this also suggests an increased risk of developing dementia.

If someone has been diagnosed with Parkinson’s later in life, has had Parkinson’s for a long period of time or has a family member with dementia, this can increase their risk of developing dementia.

How is Parkinson’s dementia diagnosed?

A specialist will diagnose this condition based on the patient’s symptoms, their medical history and the results of a medical examination. There is no specific blood test for this condition, but tests of memory and thinking will help confirm what the problem is.

The specialist may also talk to your spouse or family members to confirm the problems that issues such as memory difficulties are causing on a day-to-day basis.

It is important that other problems, such as severe depression, are excluded before the diagnosis of Parkinson’s dementia can be considered.

What can be done to help?

As with Parkinson’s, the symptoms of dementia can’t be cured, but they can be treated.

Reviewing your current medication
If someone with Parkinson’s has been diagnosed with dementia, the next step is for their specialist or Parkinson’s nurse to have a look at what medication they’re taking.

This is because some of the side effects of Parkinson’s medication can make the symptoms of dementia worse.

However, reducing the dose or withdrawing these drugs may mean that the Parkinson’s symptoms aren’t controlled as well as before.

Some people with Parkinson’s may be suitable for dementia medication. This is likely to depend on the stage of dementia and the person’s health. It may involve further memory and cognitive testing to see whether there is any change in symptoms over time.

These medications can’t cure or slow down the condition’s progress, but they can treat symptoms of dementia, such as hallucinations, delusions and confusion. Speak to your healthcare professional about taking these medications alongside your Parkinson’s medication.

Some people with Parkinson’s dementia can experience behavioural problems, such as sudden outbursts of anger. Medications called ‘antipsychotics’ or ‘neuroleptics’ might be considered to treat these symptoms. Specialists usually avoid prescribing neuroleptics, but in some cases, if behavioural symptoms are becoming especially problematic, very low doses of these medications may have to be used. If this medication is prescribed, the healthcare professionals in charge of a person’s care should monitor the situation carefully.

Any medication you take will need to be monitored.

It’s important to discuss the potential risks or side effects of any drug with your specialist so you can weigh these up against the problems you might have if you don’t take them.

If you have any questions about medication for Parkinson’s dementia, speak to your GP, specialist or Parkinson’s nurse for more advice and information.

Medication can be helpful, but it’s also useful for people to get treatment from a wide range of healthcare professionals. People such as physiotherapists, occupational therapists, dietitians and speech and language therapists can help the person with dementia and those supporting them.

You can be referred to these health professionals through your GP, specialist or Parkinson’s nurse. In some areas, you might be able to refer yourself at the local hospital or community health clinic.

If you have been diagnosed with early stage dementia, you may want to make some important decisions about things like your finances or Will, and what sort of healthcare and social care you’d like in the future. You may also want to choose someone you trust to handle your affairs, and make this a legal agreement, such as a Power of Attorney. For more information and advice, you can contact the Office of the Public Guardian (England and Wales), the Office of Care and Protection (Northern Ireland) or the Office of the Public Guardian (Scotland). Contact details are listed on page 6 of this information sheet.

Caring for someone with dementia

If someone becomes less able because of their dementia, it may be necessary for their family or friends to start helping with things such as shopping, housework or cooking. If this is the case, the person may be able to apply for an Attendance Allowance or Disability Living Allowance, which will help provide some financial support.

If you are caring for someone with dementia, there are some practical things you can do that can help reduce their agitation or confusion and make life a bit easier:

Difficulties with communication can be upsetting and frustrating for the person with dementia and for those around them. But there are some basic things you can do to make life a little bit easier.

The following information has been provided by the Alzheimer’s Society.

Sometimes, the best thing to do is to just listen, and show that you care.

Other causes of communication difficulty

It is important to bear in mind that communication can be affected by other factors in addition to dementia – for example:

Dr Iracema Leroi,
Consultant Psychiatrist for the Elderly and Honorary Senior Lecturer with a special interest in mental health in Parkinson’s, University of Manchester 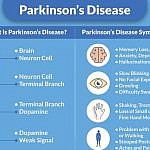