One wonders whether Meryl Streep’s forgetting her spectacles on the way up to collect her Golden Globe on Sunday was deliberate: an attempt to counter the criticism that her presentation of former British Prime Minister Margaret Thatcher as a pathetic, semi-demented crone in the Iron Lady was cruel and unusual portrayal. “Hey look, I’m a losing it too.”

The conceit of Baroness Thatcher’s remarkable life being told in a series of flashbacks during conversations with her dead husband, Denis (played by Jim Broadbent), looks an awful lot like revenge on a figure the lefty liberal arts community has not merely never understood, but actively hated. Ms. Streep’s thanking the English for allowing her to come and “trample all over their history” was also telling.

It is suggested that Ms. Streep is now a shoo-in for the Best Actress Oscar. Best prosthetics, maybe. Her last Oscar was for playing Julia Childs. Ms. Streep couldn’t help biting the hand that fed her there by suggesting Ms. Childs’ cuisine caused heart disease and calling the celebrity chef “a pawn of big business.” This from the woman who joked on Sunday that Harvey Weinstein was “God.” She has admitted that she didn’t agree with Mrs. Thatcher’s politics, but then how could she even begin to understand them? Ms. Streep, we might remember, caused panic over a harmless chemical, Alar, and damaged the entire North American apple business. Mrs. Thatcher had a degree in chemistry from Oxford.

The Iron Lady clumsily covers all the bases, from Mrs. Thatcher’s penetration of the appeasing Tories under Edward Heath, through her election as Prime Minister, the fear and outrage over her first budget, the miners’ strike, the Brighton bombing, the Falklands War, the economic recovery and her final defeat over the poll tax. Screenwriter Abi Morgan and director Phyllida Lloyd claim they saw Mrs. Thatcher’s life as a Shakespeare play, but the fact that they had in mind King Lear rather that Henry V suggests – with apologies to Julius Caesar – that they really did come to bury Mrs. Thatcher rather than praise her. The first British woman Prime Minister had very little in common with King Lear, except perhaps that her Tory colleagues ultimately took the role of Goneril and Regan. How sharper than a serpent’s tooth it is to have a thankless Cabinet. 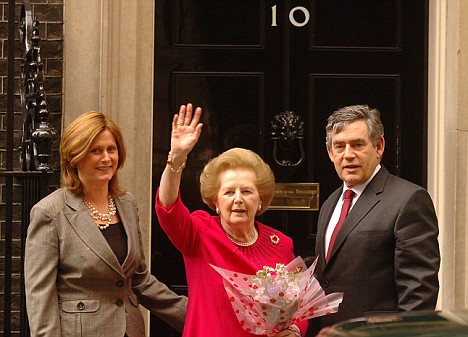 The unkindest cut of all comes at the end of the movie when, having finally managed to pack up the old clothes of Denis – who has played a kind of phantasmagoric Fool throughout – the departing husband turns and says that she’ll be all right on her own, “You always have been.”

The former Prime Minister’s memory has been so badly affected by the debilitating condition that she frequently forgets her beloved husband Denis has died, her daughter disclosed yesterday.

In a moving account of her mother’s ‘frightening’ slide into dementia, Miss Thatcher said she had to remind the 82-year-old about the ‘truly awful’ death of her husband.

In her memoirs, to be published next month, she described the Iron Lady’s increasing struggle to remember day-to-day activities or the world affairs which once dominated her life.

Friends of the baroness said earlier this year that her short-term memory had been affected by a series of minor strokes, but the book is the first time any of her family have publicly discussed her condition.

Miss Thatcher’s memoir describes the toll the condition has taken on the famously sharp mental powers of Lady Thatcher, who was Prime Minister from 1979 to 1990.

She writes: ‘As she became increasingly frail, many of her friends and colleagues became extraordinarily considerate when dealing with the new Lady T.

“I will not go mad,” she says, echoing Lear. But she is not going mad, merely tragically senile, and this should certainly not be how she is remembered. 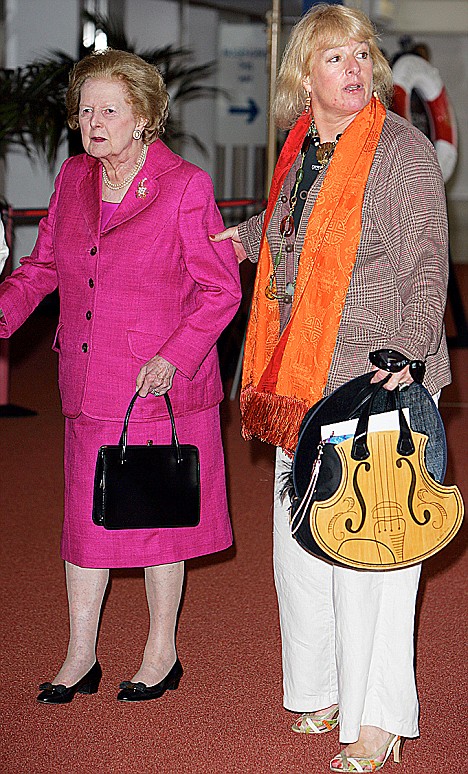 Ms. Streep at times elicits real compassion in her role, but one can’t help concluding that this movie was at best misconceived and at worst a hatchet job on one of the most significant political figures in the past 50 years.

Anybody who wants to begin to understand Baroness Thatcher and the depth of both her convictions and her wisdom should read her two autobiographical volumes, The Downing Street Years and The Path to Power. Both are related with painstaking forthrightness and often dry humour. She came to power in 1979 determined to reverse the 30-year socialist “consensus” that, with scarcely a peep from her own party, had left Britain “sick man of Europe.” She saw herself faced with three challenges: “long-term economic decline, the debilitating effects of socialism, and the growing Soviet threat.” None of these challenges is clearly explained in the movie.

It was her staunch commitment to free-market principles, her unwillingness to bow to the public opinion polls, and her luck – if you can call it lucky to survive being blown up by the Irish Republican Army and have the Argentineans invade the Falklands – that enabled her to take on the unions, cut taxes, reduce regulation, privatize swathes of sinkhole nationalized industry and return Britain to a position of respect on the world stage.

The role of her father and Grantham mayor Alfred Roberts receives its full due in the movie, but only perhaps to make it look as if she has somehow been programmed young rather than having thought through the soundness of a set of principles. She believed that “It was the job of government to establish a framework of stability – whether constitutional stability, the rule of law, or the economic stability provided by sound money – within which individual families and businesses were free to pursue their own dreams and ambitions.”

The measures she was forced to take by economic reality – not ideology – inevitably meant many plant closures and lost jobs, but her policies worked. In the 1980s, British productivity grew faster than in any other industrial economy. Some 3.3 million new jobs were created between March 1983 and March 1990.

Mrs. Thatcher opposed “naive internationalism” of the kind represented by the UN, as well as the regulatory absurdities and political ambitions she saw lurking within the European Community. If her wisdom is anywhere currently apparent, it is in her skepticism about the “European Ideal,” which is now crumbling.

In the movie, however, her principles are portrayed as the tedious platitudes recalled by a demented old woman. This is not merely mediocre art and bad history, it is shameful.