Researchers at Georgetown University Medical Center have used tiny doses of a leukemia drug to halt accumulation of toxic proteins linked to Parkinson’s disease in the brains of mice. This finding provides the basis to plan a clinical trial in humans to study the effects.

“This drug, in very low doses, turns on the garbage disposal machinery inside neurons to clear toxic proteins from the cell. By clearing intracellular proteins, the drug prevents their accumulation in pathological inclusions called Lewy bodies and/or tangles, and also prevents amyloid secretion into the extracellular space between neurons, so proteins do not form toxic clumps or plaques in the brain,” says the study’s senior investigator, neuroscientist Charbel E-H Moussa, MB, PhD. Moussa heads the laboratory of dementia and Parkinsonism at Georgetown.

When the drug, nilotinib, is used to treat chronic myelogenous leukemia (CML), it forces cancer cells into autophagy – a biological process that leads to death of tumor cells in cancer.

“The doses used to treat CML are high enough that the drug pushes cells to chew up their own internal organelles, causing self-cannibalization and cell death,” Moussa says. “We reasoned that small doses – for these mice, an equivalent to one percent of the dose used in humans – would turn on just enough autophagy in neurons that the cells would clear malfunctioning proteins, and nothing else.”

Moussa, who has long sought a way to force neurons to clean up their garbage, came up with the idea of using cancer drugs that push autophagy in tumors to help diseased brains. “No one has tried anything like this before,” he says.

Moussa, and his two co-authors – graduate student Michaeline Hebron and Irina Lonskaya, PhD, a postdoctoral researcher in Moussa’s lab – searched for cancer drugs that can cross the blood-brain barrier. They discovered two candidates – nilotinib and bosutinib, which is also approved to treat CML. This study discusses experiments with nilotinib, but Moussa says that use of bosutinib is also beneficial.

Nilotinib is a selective Bcr/Abl tyrosine kinase inhibitor. This type of medicine is used in treatment of leukemia (specifically chronic myeloid leukemia.) Nilotinib is considered a “second-generation” Bcr/Abl tyrosine kinase inhibitor, building on the success of imatinib. Because many patients develop resistance to imatinib, there is excitement about nilotinib. A recent research report concluded it has “great potential” for leukemia treatment.

Nilotinib is an analog of imatinib with similar multiple kinase targets, but without inhibition of the Src gene. (This gene regulates tyrosine kinase proteins that in turn affect whether cells multiply or die.) Tyrosine kinase inhibitors interfere with cell communication and growth. They have been of great interest to scientists in recent years who hope to use them as an option to treat cancer.

The “binding mode” of nilotinib is energetically more favorable than that of imatinib. This results in a more selective targeting of the malignancy. Nilotinib has been shown to have an approximately 20-fold increased potency in kinase and proliferation assays compared to imatinib. This is especially important for older patients and they tend to have trouble tolerating imatinib treatment. The higher dosages required for imatinib make it tough; nilotinib is hoped to alleviate the side effects but still be effective. 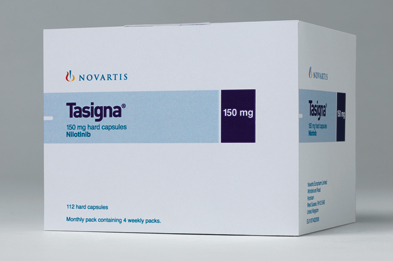 Researchers have been interested in aurora kinases as targets for cancer therapy and seveal drugs are in development. Oncogenic BCR-ABL tyrosine kinase, which is deregulated in as many as 95% of chronic myeloid leukemia (CML) patients and in ~20% of adult Philadelphia-positive (Ph+) acute lymphoblastic leukemia (ALL) patients. ABL kinase domain mutations have been implicated in the resistance to imatinib mesylate of Philadelphia-positive (Ph+) leukemia patients.

The mice used in this study over-express alpha-Synuclein, the protein that builds up in Lewy bodies in Parkinson’s disease and dementia patients and which is found in many other neurodegenerative diseases. The animals were given one milligram of nilotinib every two days. (By contrast, the FDA approved use of up to 1,000 milligrams of nilotinib once a day for CML patients.)

“We successfully tested this for several diseases models that have an accumulation of intracellular protein,” Moussa says. “It gets rid of alpha synuclein and tau in a number of movement disorders, such as Parkinson’s disease as well as Lewy body dementia.”

The team also showed that movement and functionality in the treated mice was greatly improved, compared with untreated mice.

In order for such a therapy to be as successful as possible in patients, the agent would need to be used early in neurodegenerative diseases, Moussa hypothesizes. Later use might retard further extracellular plaque formation and accumulation of intracellular proteins in inclusions such as Lewy bodies.

The study was supported by a National Institutes of Health grant (NIA 30378) as well as Georgetown University funding.

Moussa is listed on a provisional patent application to use nilotinib and bosutinib as a therapeutic approach in neurodegenerative diseases.

About Georgetown University Medical Center Georgetown University Medical Center is an internationally recognized academic medical center with a three-part mission of research, teaching and patient care (through MedStar Health). GUMC’s mission is carried out with a strong emphasis on public service and a dedication to the Catholic, Jesuit principle of cura personalis – or “care of the whole person.” The Medical Center includes the School of Medicine and the School of Nursing & Health Studies, both nationally ranked; Georgetown Lombardi Comprehensive Cancer Center, designated as a comprehensive cancer center by the National Cancer Institute; and the Biomedical Graduate Research Organization (BGRO), which accounts for the majority of externally funded research at GUMC including a Clinical Translation and Science Award from the National Institutes of Health.