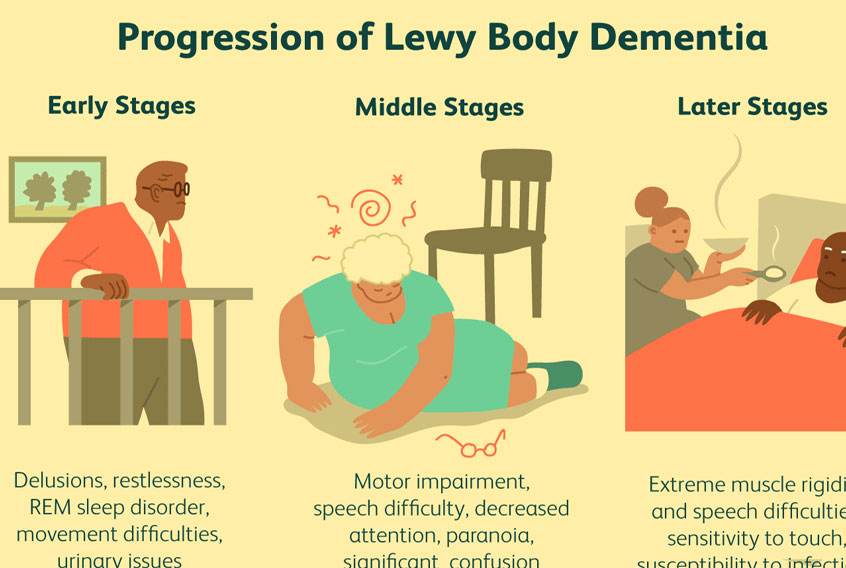 Lewy body dementia, the second most common type of progressive dementia after Alzheimer’s disease, causes a progressive decline in mental abilities. It may also cause visual hallucinations, which may take the form of seeing shapes, colors, people or animals that aren’t there or, more complexly, having conversations with deceased loved ones.

Another indicator of Lewy body dementia may be significant fluctuations in alertness and attention, which may include daytime drowsiness or periods of staring into space. And, like Parkinson’s disease, Lewy body dementia can result in rigid muscles, slowed movement and tremors.

In Lewy body dementia, abnormal round structures – called Lewy bodies – develop in regions of your brain involved in thinking and movement.

What are Lewy bodies?

Lewy bodies, named after the doctor who first identified them in 1912, are tiny, spherical protein deposits found in nerve cells. Their presence in the brain disrupts the brain’s normal functioning, interrupting the action of important chemical messengers, including acetylcholine and dopamine. Researchers have yet to understand fully why Lewy bodies occur in the brain and how they cause damage.

Lewy body dementia signs and symptoms may include:

The cause of Lewy body dementia isn’t known, but the disorder may be related to Alzheimer’s or Parkinson’s disease.

Some scientists have suggested there’s a Lewy body variant of Alzheimer’s disease. Conversely, Lewy body dementia and Alzheimer’s simply may coexist in some people.

Although the cause of Lewy body dementia isn’t clear, several factors appear to increase the risk of developing the disease. They include:

Preparing for your appointment

You’ll probably first bring your symptoms to the attention of your family doctor, who may refer you to a dementia specialist – usually a neurologist or a psychiatrist.

What you can do

To make the best of the time you have with your doctor, plan ahead and write lists of important information, including:

You might also want to bring a family member or close friend who can tell the doctor about symptoms you might not have noticed.

What to expect from your doctor
You and your spouse, partner or someone else who knows you well may be asked about:

For the doctor to make a diagnosis of Lewy body dementia, you must have experienced a progressive decline in your ability to think, as well as two of the following:

No single test can diagnose Lewy body dementia. Instead, doctors diagnose the disease through a process of elimination – ruling out other diseases and conditions that may cause similar signs and symptoms. Tests may include:

Neurological exam
As part of your physical exam, your doctor may also check for signs of Parkinson’s disease, strokes, tumors or other medical conditions that can impair brain function as well as physical function. The neurological exam may test:

Assessment of mental abilities
A short form of this type of test, which assesses your memory and thinking skills, can be done in less than 10 minutes in your doctor’s office. Longer forms of neuropsychological testing can take several hours. Your results are then compared with those of people from a similar age and education level. This can help distinguish normal from abnormal cognitive aging, and may help identify patterns in cognitive functions that provide clues to the underlying condition.

Lab tests
Simple blood tests can rule out physical problems that can affect brain function, such as vitamin B-12 deficiency or an underactive thyroid gland.

Electroencephalogram (EEG)
If your confusion comes and goes, your doctor may suggest an EEG. This test can help determine if your symptoms are better explained by seizures or Creutzfeldt-Jakob disease, a rare, degenerative brain disorder that leads to dementia. This painless test records the electrical activity in your brain via wires attached to your scalp.

Brain scans
Your doctor may order an MRI or CT scan to check for evidence of stroke or bleeding, and to rule out the possibility of a tumor.

Treatment can be challenging, and there’s no cure for Lewy body dementia. Instead, doctors treat the individual symptoms.

Therapies
Because antipsychotic drugs can worsen the symptoms of Lewy body dementia, it might be better to initially try nondrug approaches, such as:

How is dementia with Lewy bodies treated?

At present, there is no cure for dementia with Lewy bodies. Symptoms such as hallucinations may diminish if challenged, but it can be unhelpful to try to convince the person that there is nothing there. It is sometimes better to try to provide reassurance and alternative distractions. For more information, see Factsheet 520, Hallucinations in people with dementia.

Recent research suggests that the cholinesterase inhibitor drugs used to treat Alzheimer’s disease may also be useful in treating DLB, although they are not yet licensed for this use. However, recent guidelines from the National Institute of Clinical Excellence (NICE) do suggest that these drugs should be considered for ‘people with DLB who have non-cognitive symptoms causing significant distress to the individual, or leading to behaviour that challenges’.

A recent study also found the drug memantine (Ebixa) to improve general function in DLB although further studies are required to confirm this.

People who are experiencing symptoms such as rigidity and stiffness due to parkinsonism may benefit from anti-Parkinson’s disease drugs, although these can make hallucinations and confusion worse. Physiotherapy and mobility aids may also help alleviate these problems.

Dementia with Lewy bodies and neuroleptics

Neuroleptics are strong tranquillisers usually given to people with severe mental health problems. In the past, they have frequently been prescribed to people with dementia. However, it is always preferable to find ways of dealing with a person’s distress and disturbance that do not involve medication. Under no circumstances should neuroleptics be prescribed as a substitute for good quality care.

For people with dementia with Lewy bodies, neuroleptics may be particularly dangerous. This class of drugs induce Parkinson-like side-effects, including rigidity, immobility, and an inability to perform tasks or to communicate. Studies have shown that they may even cause sudden death in people with DLB. If a person with DLB must be prescribed a neuroleptic, this should be done with the utmost care, under constant supervision, and should be monitored regularly.

The names of many of the major neuroleptics available are listed below. New drugs are appearing from time to time. The generic name is given first, followed by some of the common proprietary (drug company) names for that particular compound: aripiprazole (Abilify), chlorpromazine (Largactil), clopenthixol (Clopixol), haloperidol (Haldol, Serenace), olanzapine (Zyprexa), promazine quetiapine (Seroquel), risperidone (Risperdal), sulpiride (Dolmatil, Sulparex, Sulpitil), trifluoperazine (Stelazine).

When caring for someone with dementia with Lewy bodies, it is important to be as flexible as possible, bearing in mind that the symptoms of DLB will fluctuate.

Each person with dementia experiences symptoms and progression differently. Consequently, techniques to care for each person vary. Caregivers may need to adapt the following tips to individual situations:

People with dementia often experience a worsening of their symptoms when they are frustrated or anxious. The following techniques may help promote relaxation.

You can help a person cope with the disease by listening, reassuring the person that he or she still can enjoy life, providing unconditional love and doing your best to help the person retain dignity and self-respect.

Caregivers must watch closely to make sure the person with Lewy body dementia doesn’t fall or lose consciousness or react badly to medications, and they must reassure that person during times of delusions or hallucinations.

Looking after yourself
The physical and emotional demands of caregiving can be exhausting. Feelings of anger and guilt, frustration and discouragement, worry and grief, and social isolation are common. If you’re a caregiver for someone with this disease, you can help yourself and help prevent caregiver burnout by doing the following:

Many people with Lewy body dementia and their families can benefit from counseling or local support groups. Contact your local agencies on health or aging to get connected with support groups, doctors, resources and referrals, home care agencies, supervised living facilities, a telephone help line and educational seminars. 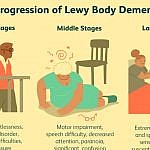