Scientists from the Florida campus of The Scripps Research Institute (TSRI) have produced an approach that protects animal models against a type of genetic disruption that causes intellectual disability, including serious memory impairments and altered anxiety levels.

The findings, which focus on treating the effects of mutations to a gene known as Syngap1, have been published online ahead of print by the journal Biological Psychiatry.

“Our hope is that these studies will eventually lead to a therapy specifically designed for patients with psychiatric disorders caused by damaging Syngap1 mutations,” said Gavin Rumbaugh, a TSRI associate professor who led the study. “Our model shows that the early developmental period is the critical time to treat this type of genetic disorder.”

In the new study, the researchers examined the effect of damaging Syngap1 mutations during development and found that the mutations disrupt a critical period of neuronal growth—a period between the first and third postnatal weeks in mouse models. “We found that a certain type of cortical neuron grows too quickly in early development, which then leads to the premature formation of certain types of neural circuits,” said Research Associate Massimilano Aceti, first author of the study.

The researchers reasoned that this process might cause permanent errors in brain connectivity and that they might be able to head off these effects by enhancing the Syngap1protein in the newborn mutant mice. Indeed, they found that a subset of neurons were misconnected in the adult mutant mice, suggesting that early growth of neurons can lead to life-long neural circuit connectivity problems. Then, using advanced genetic techniques to raiseSyngap1 protein levels in newborn mutant mice, the researchers found this strategy completely protected the mice only when the approach was started before this critical developmental window opened.

As a result of these studies, Rumbaugh and his colleagues are now developing a drug-screening program to look for drug-like compounds that could restore levels of Syngap1 protein in defective neurons. They hope that, as personalized medicine advances, such a therapy could ultimately be tailored to patients based on their genotype. 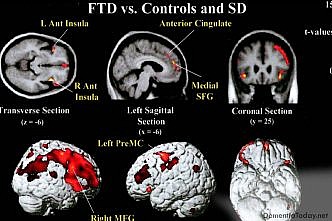 What is frontotemporal dementia?