Wernicke-Korsakoff syndrome causes a loss of specific brain functions due to a lack of vitamin B1, or thiamine, which is an essential vitamin involved in helping the body make energy from carbohydrates. It also helps the heart, nervous system and muscles to function properly. It’s found in pasta, whole grains, lean meats, fish, fortified cereals, peas, dried beans and soya beans.

Symptoms
The initial physical symptoms due to brain damage are known as Wernickes encephalopathy and include abnormal gait and eye movements, which if untreated leads to the psychiatric disorder known as Korsakoff syndrome including dementia and psychosis.

People with Wernicke-Korsakoff syndrome are often mistakenly thought to be drunk, as there may be symptoms of uncoordinated walking and confusion. Other symptoms include disturbed vision and hallucinations.

People with the condition may also appear malnourished and may try to hide their memory loss by confabulating.

If alcohol misuse is the cause, symptoms associated with alcohol withdrawal, such as sweating and tremors, may also be present.

* 1/1,000 population worldwide.
* A survey of new long-stay mental hospital patients in Scotland found that 9% had a diagnosis of alcohol-related brain damage.
* Peak onset is seen in males aged 40-59 years and in females aged 30-49 years.
* Approximately 2% of alcohol abusers develop the syndrome.
* There is much greater risk in continuous rather than binge drinking.
* No racial predilection is observed.
* The condition affects males slightly more frequently than it affects females.

Chronic alcohol consumption can result in thiamine deficiency by causing:

People differ in their susceptibility to thiamine deficiency, however, and different brain regions also may be more or less sensitive to this condition.

Thiamine is a cofactor required by three enzymes in pathways of carbohydrate metabolism:

* A reduction in thiamine can interfere with numerous cellular functions.
* Alcohol-related neuronal loss has been documented in specific regions of the cerebral cortex, hypothalamus and cerebellum.
* No change is found in basal ganglia, nucleus basalis, or serotonergic raphe nuclei.

Many of these regions which are normal in uncomplicated alcoholics are damaged in people with Wernicke-Korsakoff syndrome (WKS).

Chronic subdural haematoma has been documented as a cause of WKS; the symptoms persisted after resolution of the haematoma as a result of organic atrophic changes of both the frontal and temporal lobes due to long-term compression.

It has also been reported following nutritional stress, e.g. laparotomy for small bowel obstruction, followed by total parenteral nutrition for one month, bariatric surgery or rapid weight-loss. Follow-up of thiamine status for at least 6 months after bariatric surgery is recommended.

The main cause of Wernicke-Korsakoff syndrome is long-term alcohol misuse, which can lead to poor absorption and storage of thiamine.

This vitamin deficiency can also arise as a consequence of severe malnutrition or starvation, prolonged vomiting and eating disorders.

Wernicke-Korsakoff syndrome is most common in people aged over 45 and affects more men than women.

As with many health problems, following a healthy lifestyle that includes drinking alcohol only within safe recommended amounts (up to three to four units a day for men, and two to three units a day for women) and eating a healthy, balanced diet means alcohol-related and vitamin B1 deficiency-related health problems, such as Wernicke-Korsakoff syndrome, can be avoided.

Less commonly the syndrome is not due to alcohol abuse but follows nutritional stress such as rapid weight loss, bowel obstruction, thyrotoxicosis, cancer or renal dialysis.

A percentage of patients with Wernicke’s encephalopathy develop Korsakoff’s psychosis. Only 20% of such patients recover completely, and a significant number require long-term care.

One study suggested that the development of Korsakoff’s psychosis may depend on the degree of alcohol-related neurotoxicity that occurs before thiamine prevention is instituted.

* Korsakoff’s psychosis can develop in untreated or undertreated Wernicke’s encephalopathy. One study in Glasgow found an increase in incidence which was thought to be related to a reduction by physicians in the use of parenteral thiamine after the CSM warning.
* Symptoms of alcohol withdrawal syndrome (tremors, hallucinations, convulsions) can complicate the picture.
* Recurrence of encephalopathy can recur in patients who continue to drink alcohol and fail to maintain their thiamine intake, and in non-alcoholics with persisting thiamine deficiency due to noncompliance or untreated secondary disease.
* Congestive heart failure may be a complication and appears to be related to intracellular oedema and fibrosis of the cardiac muscle.
* Vertical nystagmus may resolve slowly, but fine horizontal nystagmus may persist indefinitely in up to 60% of cases. Most other ocular symptoms resolve rapidly.
* Ataxia may persist in 40% of patients, who continue to suffer from a slow shuffling gait.
* Global confusion state may be slow to resolve, and there may be persisting learning difficulties and memory impairment.

Once the syndrome’s diagnosed, hospital admission is required to control symptoms. Thiamine replacement may improve symptoms of confusion, difficulties with vision and eye movement, and lack of coordination. It doesn’t generally improve loss of memory and intellect.

Further treatment aims to control symptoms and prevent the disorder progressing. An important part of this is total abstinence from alcohol and eating a healthy diet. 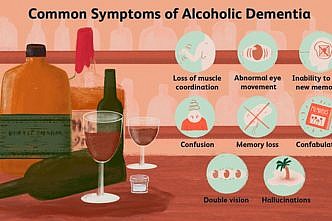